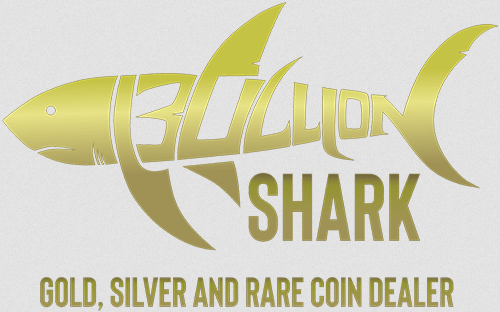 The company known as Bullion Shark is focused on selling rare numismatic coins as well as silver and gold bullion. This business is family owned and operated and offers a varied selection of products to their customers.

How do they stack up against their competition? Is this actually a legitimate business? We’ll answer these questions and more below.

We urge you to view the links to see where Bullion Shark stacks up against the competition.

The most important thing to understand is that this company sells precious metals products online and they have a wide assortment of different available products. Additionally, besides selling silver and gold coins, they even sell collector sets and rare coins as well. Some of the main categories that they sell in include:

It seems this company mainly focuses on pure bullion and collectibles. On staff, the company employs numismatic experts with the knowledge and expertise to explain the collectible coin buying and selling process.

Unfortunately, they have a somewhat worrying way of selling collectible coins. They claim that collectible coins have big time growth potential over time, which definitely has some truth to it. But they failed to downplay that this investment is risky to say the least. Additionally, they potentially markup collectible coins far higher than the actual value and expected purchase price.

When all is said and done, it appears that Bullion Shark is definitely a legit company and the products that they offer are also legitimate. So, let’s take some time to investigate past customer experiences and info shared by the Better Business Bureau to get a better picture of the overall company.

As mentioned above, this company is definitely a legit business to say the least. They gained accreditation with the Better Business Bureau in 2017 and also have an A+ rating with this well-respected group. They have even received reviews from 20 to customers on the website with an average review of 4.27 stars out of 5 stars.

In the past three years, the company’s experienced 2 different complaints with the BBB, but they are both closed to the customer’s satisfaction.

On Facebook, this company has also received reviews that are extremely positive, and 40 customers have given them nearly an average of 5 out of 5 stars.

On the other hand, the company has also received some extremely alarming and somewhat concerning reviews on various websites. We will now look at the biggest complaints against them.

Complaints from Past Customers

One complaint made on the Better Business Bureau was written in 2020. The reviewer said that the company sent them a coin set and when it arrived, it showed up at their door in damaged boxes. Also, the coins weren’t in the right places. This immediately reduced their overall value.

The reviewer attempted to reach out to the company but to no avail. When they called them regarding the issue, a customer service rep wouldn’t help them at all. The person on the phone said they only handled sales and nothing more. The customer was told to send an email to the customer service department.

After sending the email, the customer received a response but it took longer than a week. The company claimed that they would send them a return slip so they could mail back the damaged goods to get a full refund. Unfortunately, the customer never actually received the return slip. After attempting to repeatedly get a response from the company, the representatives there ignored them.

In the review, the customer said that the matter was eventually resolved. But this resolution wasn’t made public. This seems a lot to tell you the truth, but this doesn’t necessarily mean it’s a red flag. Sometimes the BBB removes certain responses and reviews when they are no longer relevant, and this could be the case.

Another complaint comes from a third-party website, in which they said they had a very similar issue with a damaged product just like the previous reviewer.

A website called US Reviews, another third-party website, has a wide array of different complaints made against this company. Plus, they have a star rating for this company in the number of different categories that include:

One of their customers claimed to have major repeated problems with Bullion Shark. First, they sent this person the wrong coin after winning an auction. The customer mailed them back the coin and paid for shipping to get it back to them. The company then sent them a new coin but it was ungraded.

The customer then one another bid to purchase five coins on the auction site. Instead of getting the products sent to them immediately, they had to keep calling and emailing the company to get them to ship it. Eventually they claimed that they sent the coins via priority mail, but the customer never actually received them.

A different customer said they bought from this company because the pricing was excellent. Bullion Shark happily received their money for payment on order but never followed up or shared order information with the customer. The customer never even received an estimated delivery date. They want everyone to know that you should avoid doing business with this company.

Another person stepped up and mentioned that they can never buy anything from this company again, and regretted their original purchase the first time. Seemingly, this reviewer became a victim of numerous sales pitches and spam calls that were way too aggressive. The customer claimed that you should never provide personal information to this company because they will continue to harass you.

Another customer placed an order and never received their metals. He never got to follow up to tell us if this problem was eventually resolved.

A woman named Annette left a very detailed complaint about her miserable experience with this company. She made a purchase on their website and never heard from the company for over a month. Eventually after a month had passed and she had already paid her money, they decided to email her and said that there were specific limits as to the amount of precious metals they were capable of shipping to Minnesota.

The customer found this incredibly confusing to say the least because they accepted the order like there was no problem at all. Why would they accept the order if they couldn’t ship it? And why would they take so long to respond in the first place? Eventually, when the customer reps asked her if she knew somebody else out of state who could receive the shipment. The customer named Annette would get back to them if she could find somebody to accept the package.

After getting back to the company, she told them that they could ship the product to her sister, who lives in an entirely different state. In an odd turn of events, instead of working off of the original order, the company wanted to redo the order entirely right on the phone. She planned on purchasing the exact same order, so Annette found this incredibly frustrating to say the least.

As you can imagine, by avoiding to simply remake the order from the original, Annette was incredibly upset and was even more mad that they spent over a month before they actually told her that they couldn’t ship the order. The customer service team did a poor job in her opinion and she was very unsatisfied with the entire experience.

Overall, this company has experienced too much negativity and too many complaints to consider them trustworthy. So, we cannot recommend them to our readers. In fact, because of the poor customer service and the mishandling of orders, we recommend steering clear of this company altogether because you’d be better off working with a different company with a better reputation and more positive reviews.