Despite this, we still think they’ve underestimated – after all there’s a lot to be worried about in 2020

Geopolitical tensions seem to be spiraling towards something unpleasant no matter where you look in the world, while stock markets and US housing prices are back in the stratosphere.

On one hand it seems we’re on the edge of a cliff where Europe, or Asia or the Middle East could implode and yet according to the financial markets everything is unicorns and rainbows.

All it takes is a quick look outside on Main Street and the incredible financial situation the markets would have us believe we’re in doesn’t seem reflected in reality. The Dow Jones is up 30% in 2019 – a huge success for the US Economy, but the boarded up shops, food banks and decaying services we see around us would beg to differ that ordinary Americans are 30% better off.

Is the stock market in a speculator-fueled bubble? Are we about to test the true strength of the economy if tensions overflow into something worse?

Truth is we’re facing any number of “black swan” events – situations that can rock markets – and if a tested market turns out to made up of overvalued businesses, their financials a result of overextended credit lines and massaged bookkeeping, things could quickly go sideways.

Given all of this, it’s surprising that some mainstream analysts can’t see the wood for the trees. Yes there are those shouting out warnings, as there were in 2007-2008, but on the whole we’re all drinking the Kool-aid.

While the mainstream are suggesting a glorious continuation of our great economy – the surprising prediction is they see moderate gains for gold too. Gold typically runs counter to stocks, so for gold to rise, stocks tend to fall. Gold’s rise is currently down to safe-haven purchases from investors sensing a storm on the horizon, and yet the analysts say it’s ALL going to go up.

Bear in mind these same analysts said gold would struggle to hit $1400 in 2019 – when the reality was it went well over $1500 an ounce. The fact that they’re now suggesting a climb is a good sign, especially given their history of undervaluing the metal until it’s in a blindingly obvious bull market.

For 2020, they’re reluctantly suggesting a prediction of $1650/oz by year end. It’s great that they see the metal moving upwards – but hardly the work of a genius coming at a time when gold is breaking all time records weekly when priced in Euros and GBP.

The thing is, unless America is now outside of all regular fiscal rules and our economy knows better than the rest of the world, these estimates of $1650 are going to be just as wrong as their predictions were for 2019.

Gold has already hit $1570 and the true impact of Brexit, China and America’s realization that we’re $22 trillion in the red has barely even registered – yet.

The big banks who brought us to the brink of disaster in 2007 are once again using unprecedented levels of leveraged bets, all while being investigated in the US and Europe for insider dealing and market fixing.

Our economy is slowing down – some would say it never really recovered in 2008 – but a growing number of analysts say it’s time we took stock of our investment portfolio.

Given all of this, and the mainstream bullish indicators for gold, we’d say their $1650 estimate will be passed within the first half of 2020 and gold could easily reach $1750 by year end.

And if we see the crash that many are predicting within the coming 12 months, there’s no reason gold will not pass $1900 or $2000.

The investment banking giant UBS sees a dollar devaluation on the cards for 2020 and with that a strong bull run for gold. Ross Norman of London’s international bullion house Sharps Pixley, is predicting an average gold price of $1,755 for 2020, a target similar to our own.

But even our predictions are low compared to the analysts at bank Bazaar who see gold potentially hitting $5000 in 2020. Although we believe this is extremely unlikely, it’s not outside the realm of possibility.

One way or another, gold is currently undervalued – and with even the most pessimistic analysts seeing a $100 rise across the year, it makes sense to add at least a little of the yellow metal to your portfolio.

ORDER YOURS!
Investing in Gold Investing in Silver Investing in Bitcoin Using a Self Directed IRA Investment News Investing Resources
Are alternative assets like Gold right for you?
Find out by answering these five quick questions 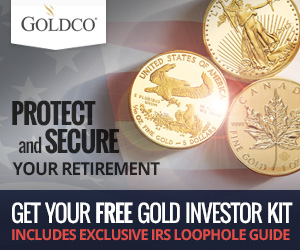